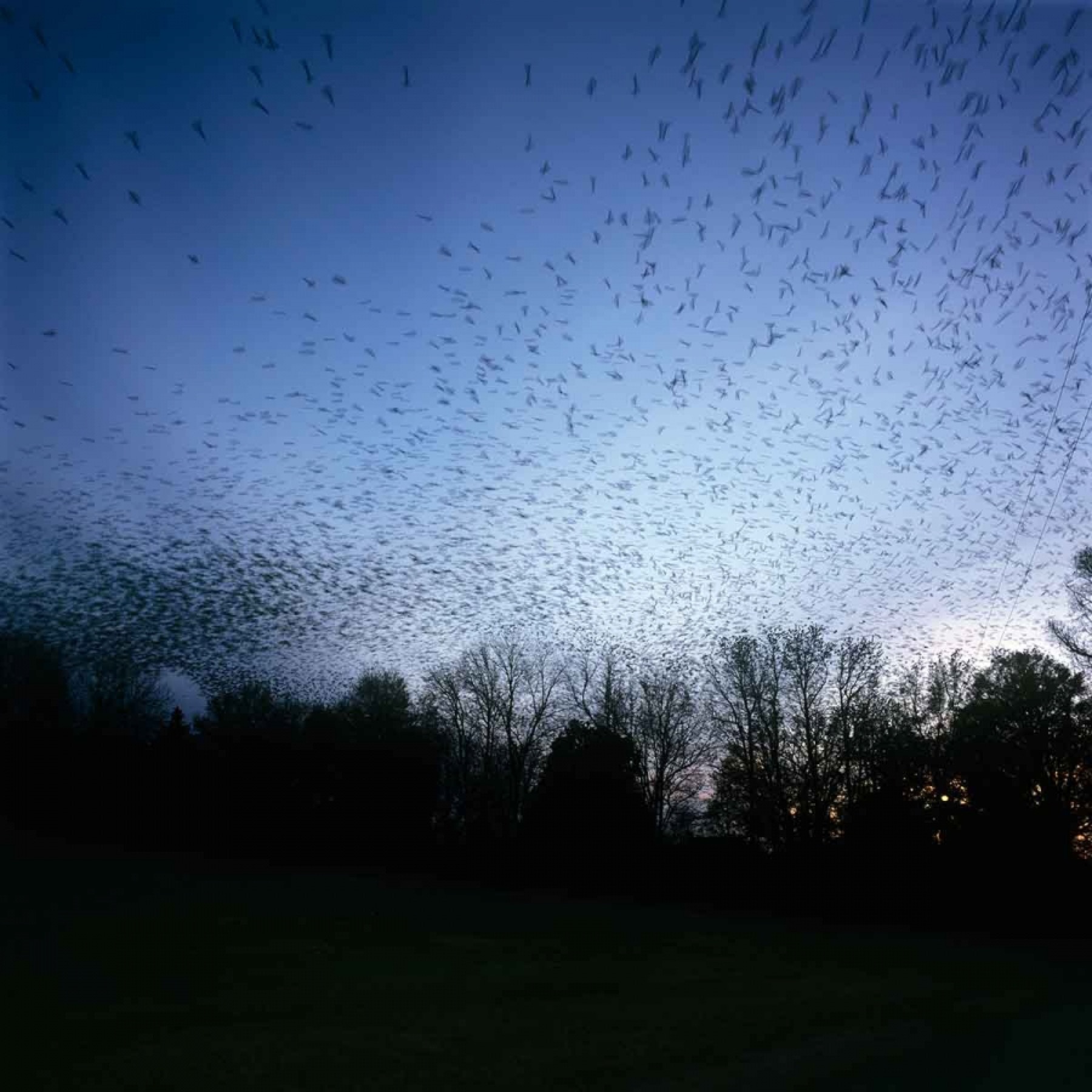 THE LANDSCAPE OF THE DELTA

Photographer Kathleen Robbins lives in South Carolina, though the Mississippi Delta is her home and the subject of her stunning body of work. As she writes in the project statement for her series Into the Flatland: “I am pulled to this place in a way that I am not able to fully articulate. It is not my nostalgia alone that creates this longing; it is that of my mother and my mother’s mother.”

The Oxford American has published three of Robbins’s images in the past year, and we recently had the opportunity to see her work in person. Into the Flatland is currently on view at the Baum Gallery at the University of Central Arkansas, the OA’s long-time educational partner. On the occasion of the exhibition, we caught up with Robbins to chat about the landscape she so beautifully captures on film.

In your project statement for Into the Flatland, you write of how you returned to your family’s farm in the Mississippi Delta after the events of September 11. I was struck by one line, in particular: “At dusk I rocked on the porch and watched the blackbirds descend on the canebrake planted by my great-grandfather.”

In the Fall 2014 issue of the OA, we printed your photograph “Blackbirds.” Can you tell about the moment in which you captured this image?

The blackbirds arrive in late November and remain until February, roosting in the cane from dusk until daylight. It’s similar to a murmuration of starlings with hundreds of birds twisting and turning in unison. The occurrence is astonishing to watch, but it’s accompanied by a pretty unpleasant stench.

When I made this particular image, I was staying on the farm during the Christmas holidays with my husband, Ben. This is my favorite time of year to be in the Delta. It’s difficult to describe, but it’s sort of like being submerged under water when standing in the middle of a fallow cotton field in December. The landscape seems simultaneously quiet and amplified. There are distant sounds of animals and shotgun blasts. The air pierces your skin. The ground beneath your feet is moist and could almost swallow a person whole after a heavy rain.

As it grows darker and colder out, birds break the silence in spurts and starts until it’s completely dark, then they settle in the trees and cane for the evening. It’s unreal.

The light is beautiful in the photograph, and the shot has such movement and depth. Did you know when you took the photo that you’d captured something special?

To witness the birds in mass is pretty invigorating, but I’m rarely confident about the relevance of any image when I’m making it, which is part of the charm for me in shooting film—the unknown caused by the delay between the exposure and the viewing of the transparency. I’m certainly not the first or last to photograph a flock of birds in the Delta, but I was pretty pleased when I first viewed the image in my studio in South Carolina.

In the OA, the photo accompanies a story by Alex Mar called “Sky Burial: Excarnation in Texas.” This story is a fascinating exploration of the Forensic Anthropology Research Facility at Texas State University, where people donate their cadavers so that they might be studied throughout the decomposition process.

What do you think about our decision to pair your work with a piece of writing that has such a different setting and context from where you took the photograph?

I love when my photographs are paired with good writing, particularly when the pairing reveals an unexpected or peculiar subtext in the image or the prose, as in the Alex Mar story.

In general, I am interested in how and where oral tradition, fiction, and the Southern landscape intersect with perception and memory. When my brother, my cousins, and I were very young, my grandmother told us stories about a “wild man” who lived “far away and deep in the woods in the top of a tree and in a hole” on our family’s farm. She described him as having a flower growing from one ear. Later, my father told me that there actually was a man who lived on the banks of the Tallahatchie River on our family’s farm for a period during the 1940’s. He hopped off a riverboat and dug a hole into the bank, which became his shelter. I imagine my grandmother’s story must have derived from that story. Whatever the origin, the “wild man” always existed for me in that landscape. I still look for him in the trees.

It seems to me that the works in this series are intensely personal; you give viewers a glimpse of your family’s history and of your deep connection to the Delta. However, once the photographs are out in the world—like in the pages of the OA or on the walls at the Baum Gallery—people are apt to imbue the work with their own experiences.

When you’re working on a photo project, do you have specific hopes for how viewers will interact with your images?

I have ideas about where I might want my work seen or printed, but when I’m in the middle of a project I’m usually just trying to make meaningful and compelling photographs and sequences. I try to explore new ideas and raise new questions, and there is time for contemplating the direction of a series in between trips to Mississippi. Gathering feedback from a few friends and colleagues at this stage is important to me, particularly when it comes to tightening a sequence of images. Later, to have a larger audience interact with the photographs is always nice, and I am excited by the potential for that interaction to change my own understanding of the work in any given series.

Into the Flatland began with “Little Steele / Christmas Day, 2006,” a photograph of my nephew. I made that image as a personal snapshot during Christmas break. When I viewed the transparency back in South Carolina, it occurred to me that it seemed to be a fairly vivid depiction of what it feels like to stand in that landscape. It is difficult to move toward the horizon. Mud cakes to your boots, and it is easy to feel stuck, even swallowed up by the landscape, particularly in winter.

In many ways, the earth is more significant and peculiar to this place than the flatness of the horizon. It seemed an apt metaphor to place the figure in the landscape in this way, so I used that image of my nephew as a catalyst for the rest of the series. I was hoping to evoke a feeling of being submerged by and in the earth. When viewers stand in front of the print, they must contemplate the sensation of standing in the mud or dirt with members of my family.

A year ago we printed another photo from this series. “Asher on Belle Chase” ran alongside Wendy Brenner’s essay, “Telegram.” This piece was about the Olympic runner Jim Beatty—the first man to run an indoor mile in less than four minutes—and an antique 26-foot telegram. What can you tell us about the original context of the photograph?

My son, Asher, was just 18 months old when I made that photograph. It was around Christmas Day 2010, and I recall wanting to photograph him in the same field where I photographed my nephew in 2006. Asher has a tendency to improvise on the farm. He moves through that landscape differently. He is less cautious and so am I, I suppose. He took off for the horizon as I was photographing him. He ran a hundred yards or so, stopping occasionally to assess if the horizon was drawing any closer. It is something profoundly sweet to observe him there.

Your most recent project is called “In Cotton.” (A photo from that series, “Buckhorn Plantation,” appears in the OA’s Spring 2014 issue alongside William Giraldi’s appreciation of author Elizabeth Spencer.) For the series, you visit people who still farm cotton in the Delta. What did you learn during your travels?

In Between the Landscape and its Other, Paul Vanderbilt wrote that we “walk the landscape to learn something about [our] own limitations. . . . In the physical, topographical fact, there are very likely all the prejudices about what a landscape is supposed to be; there is bias from literature, from the build-up of conventional images. . . . There is still something more, ephemeral and not exactly knowledge, susceptible to romantic notions but nonetheless an invitation to participate.”*

In 2010, corn and beans were planted on my family’s farm in place of cotton for the first time in 120 years. I noticed this shift developing elsewhere in the Delta landscape a few years prior. The horizon, which is ordinarily visible to its very limits, was beginning to disappear behind a wall of stalks.

I’m interested in exploring the metaphoric potential of the landscape or a particular space, rather than in making declarative work. I’m interested in the relationship between time and memory; place and identity; in the poetry of a farm’s name: Ashwood, New Hope, Belle Chase; and in the relationship between interior and exterior space. I hope the photographs are ambiguous and open-ended rather than documentary or didactic.

I have learned to work at my own pace—to see a project through to fruition even when it shifts direction. It is time-consuming, and it should be. The slow pace allows me freedom to reconsider aspects of a project. So, I have learned to let the work direct me somewhat and that has been my approach. Over the course of this project, there have been periods of time when life has intervened, like when my son was born in 2009, and perhaps I shot less during those periods.

But those experiences also manifest in the work somehow.

You are from Mississippi—then you left and decided to come back. What did you learn about your home after you returned after years away?

I’m still leaving and coming back.

When I first returned after graduate school, I spent two years on the farm trying to immerse myself in my grandmother’s experience of living there for 50 years. I read her writing, dressed in her clothes, and ate from her china. I was 25 years old and trying to map out the rest of my adult life. In her letters, my grandmother had this way of making everything seem more intense—more poignant. I sought a similar experience, and I found it was difficult to access the same level of poetry in my own life on the farm. To be honest, it was pretty lonely.

I felt a tremendous amount of personal obligation to make it work on the farm and to stay in Mississippi. When I left I was fairly certain no one would ever live in my great-great grandparents’ house again, and this has held true 11 years later. Into the Flatland began as a way for me to come to terms with my choice to leave the farm behind.