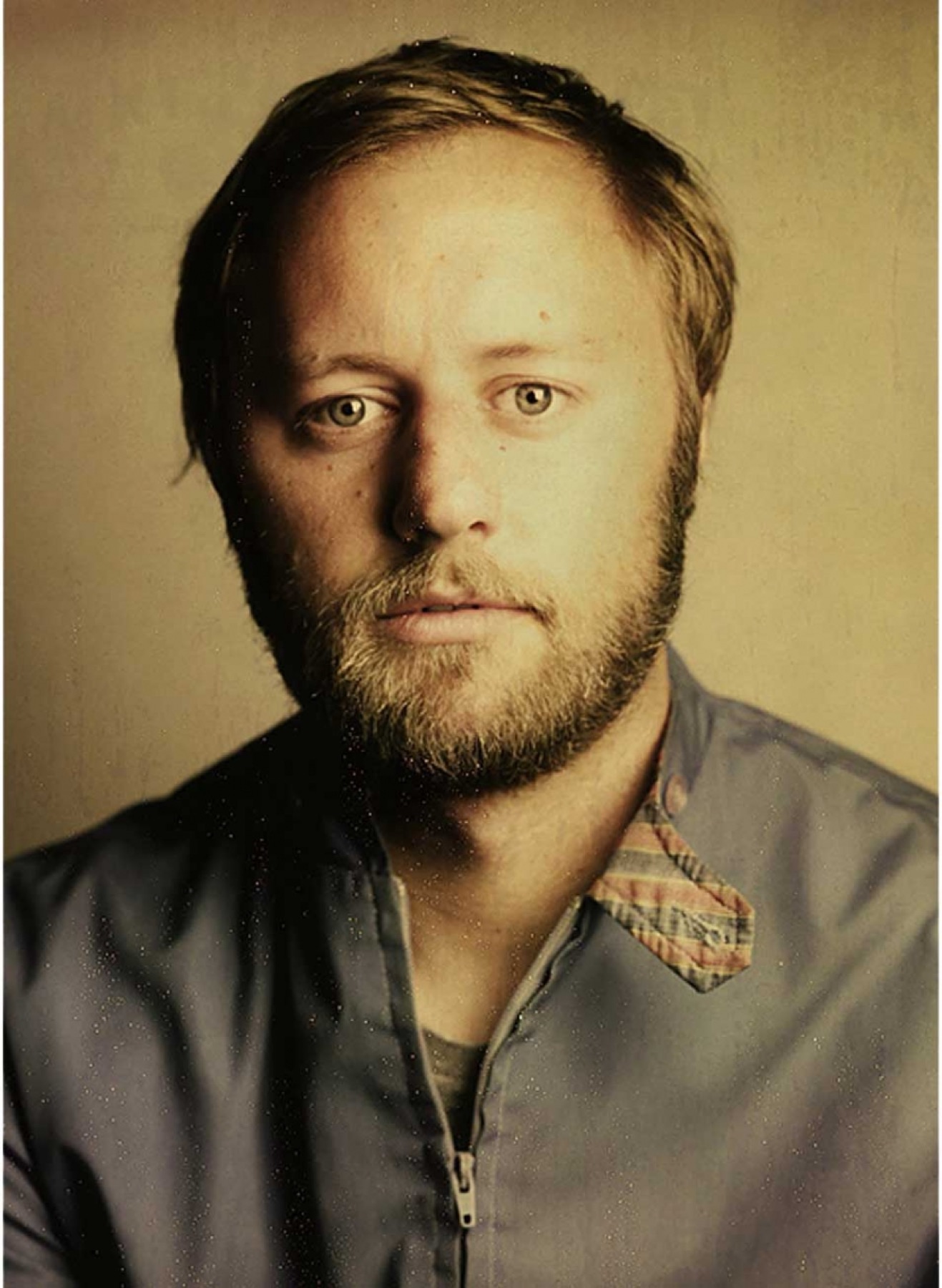 THE SOUTHERN GUY BY RORY SCOVEL

A conversation with Rory Scovel

Rory Scovel’s jokes don’t hinge on long, personal stories that culminate in crystallized punch lines. Instead, his comedy is rapid-fire ideation. Big “what if” scenarios operate like performance art (he once had a crowd clap for an entire set and did not tell a joke until delivering a one-liner as an “encore”).  He does not fit into the old stereotypes of a Southern comedian: the languid storyteller, the catchphrase about rednecks, Mark Twain. Instead, the Spartanburg, South Carolina-born comic is one of many new comics talking about the South who is not totally defined by it. The most famous modern comedians from his home state are more familiar: Aziz Ansari and Stephen Colbert. They also use their Southern pasts not to expound and confirm stereotypes, but to upend them. Scovel is closer to Colbert in this regard, often inhabiting personas to absurdity.

But, while Colbert relies on a tightly-written commitment to a single off-kilter logic, Scovel is more manic. Even on his new Netflix special, Rory Scovel Tries Stand-Up for the First Time, it’s hard to tell which jokes were written before he stepped onstage. When any amusing scene or question emerges during his free-association, Scovel seems to chase it. A comment about his shirt looking funny —“like an undercover cop who coaches Little League”—turns into a drawn-out scene of a Little League coach yelling at a kid: “You’ll never go pro,” Scovel tells a boy he keeps calling “Kev.” He is a master at following these tangents and expanding them to full scenes, setting up opportunities for both silly, one-time accents and stock personas. His most frequent character is a boisterous Southern bro he puts on to defend any misguided thought with utter confidence. Scovel can slip into that guy for a single line or an entire set.

Scovel has often gravitated back to the South for performances, too. His vinyl-only Third Man record was recorded in Nashville, his special on Seeso was done in Charleston, and the new special was filmed in Atlanta. The places had the right kind of crowds, he said.

You often slip into a character with a heavy Southern accent, kind of a bro. What effect has the South had on your comedy?

I’d say the biggest influence was probably anything religious. I was raised Catholic. And in the South, there’s such a wealthy amount of Southern Baptists. I look at [religion] a little more skeptically through the lens of someone who is from the South. It gives me the confidence to do jokes about being brought up religiously, or any kind of religion, because I feel like I kind of grew up in the thick of it. Not that any of that has anything to do with the voice I put on. That voice definitely just grew out of me needing to do something new on stage. I was like, “Oh, I know this.” And it was a combination of family members and [that] I love doing this voice. Over time I started to figure out the character. That wasn’t even so much a specific reason other than I became so obsessed with doing the character.

You stayed in that character for almost an entire side of the Third Man LP. What attracts you to staying in character for so long?

I just kind of understand the perspective of the character. I don’t know why, but I know that what I’m saying is right. If I go into a certain Southern voice, I kind of can see them in the South that I grew up in. I can probably see the car they drive. I can probably see the house that they live in, and the friends they hang out with, and the drinks they order when they go to bars, and the clothes they’re wearing. And I think because something triggers in my mind to see that character while I’m doing it, it’s almost like all those tiny details lend themselves for me. Almost like putting gas in a car. Those details keep fueling my ability to keep rambling as that person. When I’m onstage and there’s an audience there, I don’t know if it’s because your back is sort of against the wall in that moment to deliver, whatever reason it is, it somehow works, it somehow pops right. Specifically, that Southern guy character that I do. I even joke that I know that guy better than myself. But it really isn’t so much a joke. I think I might actually know that guy better than myself.

Is that because you’re both an insider and outsider to the Southern character? Because you grew up religious in the South, but Catholic, which is one step out in some way?

It does feel a little bit like that. Also, the fact that I’m not really Catholic anymore, I don’t really go to church anymore. It almost is like one more step outside looking in. And then the fact that I moved to D.C. and then New York and now L.A. and, because of stand-up comedy, I’ve traveled the country too. I feel like that almost gives me one more step outside looking in. Stepping through those layers, when I look back [in that character], they all just present themselves in my brain. I really don’t know what that is.

Sometimes you’re in the middle of your set in that character, but it seems like you’re still listening and judging what you are saying. Then you pop out some perfect line that coalesces the whole joke, makes fun of what you said before even. Are you doing a lot of listening to yourself ramble?

It’s a weird balance of listening to yourself, so you can kind of be driving the car, but also listening to the audience so you can also see the road. Whenever I have a bad set it’s usually because I’m not doing one of those things at all. I’m either not paying attention to the crowd or I was over-confident with what I was going to do. Whenever there’s a night where I’m dialed in and I have the most fun, it’s usually because I’m right fifty-fifty on listening to the crowd and myself.

Do you ever struggle to find that connection with a crowd?

If you came and saw me live tomorrow, 100% of people definitely aren’t laughing 100% of the time. Sometimes it’s these twenty people, then it’s fifty, then it’s eighty; then it’s only five. I think a smart audience is an audience that realizes they shouldn’t laugh at everything. It’s kind of absurd to think, when you go to a concert, you have to leave going: “I loved every moment. I loved everything.” It’s kind of ridiculous that everything has to be perfect and cater to what I enjoy.

How do you try to stay in the moment—and stay silly—while you’re actually doing comedy?

I think just reminding myself to quit thinking that there’s some kind of perfect show to capture; to remind myself constantly that it is comedy and mistakes are funny. Anything that is too perfect—it kind of becomes too sterile and then it does not feel genuine. If it doesn’t feel genuine then there’s no possible way people are going to feel they saw you.

We have been talking primarily about your comedy in terms of stand-up, though you do act and have a part in the new Will Ferrell and Amy Poehler comedy The House. Do you consider yourself primarily a stand-up comedian?

I think because I started as a stand-up and I rely on it and it’s a disease that’s in your brain, you can’t really walk away from it. There’s some kind of drug fix, going on stage and connecting with an audience that’s too instant, and too good, and too satisfying to walk away from. At the same time, while I say that, I can’t say that I would do this forever, because I know mentalities change. Even just having a daughter, I go on the road a lot less. I perform less in time. And just doing less of stand-up, already, just makes you—you kind of grow away from it. I’ll go back and start getting the next hour together, especially after having this special out. It would truly be the most beautiful way to walk from stand-up: put a special out called Doing Stand-Up for the First Time and then retire.

Do you think the birth of your daughter changed the way you look at comedy?

It’s made me quit caring so much about my career, and where it’s at, and what I’m doing. It’s so hard to remember the career is the thing that’s just always happening. I think we always look forward to when will I have the job where I go, “There, I did it. I made it to the top of my personal mountain of achievements. And here I am.” I think Roger Waters had a great quote, that I will misquote, but the gist of what he said was: In Pink Floyd, they were always playing and he felt like it was a big rehearsal for a big show until he finally came to realize the big show was always happening. It wasn’t a rehearsal, it was always happening. I could relate to that a little bit.

Jacob Rosenberg is a reporter from Greensboro, North Carolina. He has written for the Guardian, Mother Jones, and the Arkansas Times, among other publications.

LOWCOUNTRY FOR OLD HEADS: IN PICTURES