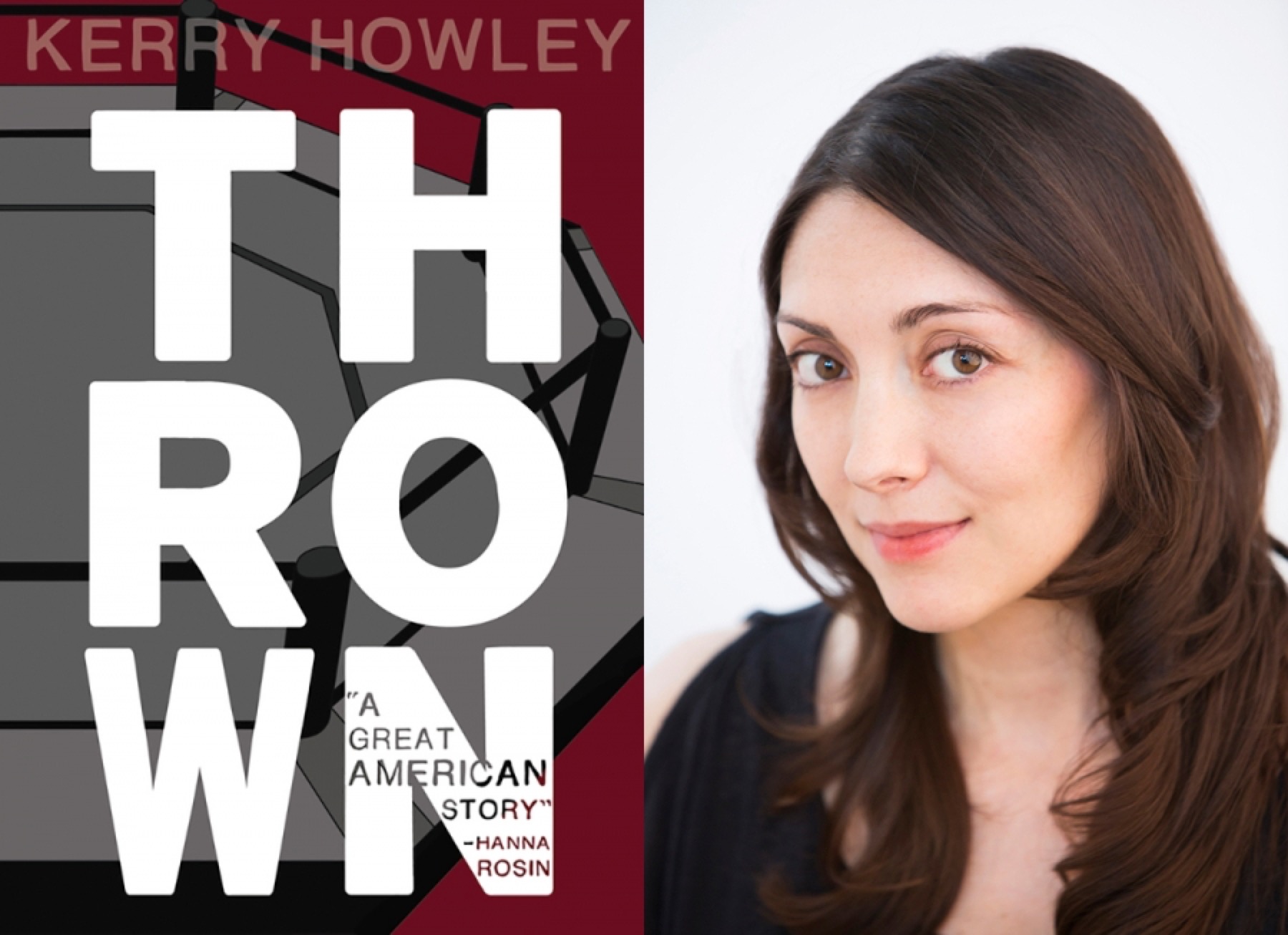 Passion, like violence, is unpredictable. It strikes in flashes and employs whatever chokehold necessary to keep its target pinned. For Kerry Howley, author of the memoir Thrown, passion felled her in Des Moines. As a graduate student in philosophy, Howley was escaping small talk during a phenomenology conference when she wandered down the convention center’s hallway and, strangely, into the MidWest Cage Championships. There, in a room full of Iowan men and spectacle violence, Howley felt the contours of her perception balloon outwards, a sensation she’d read about, but never before experienced, in the writing of Schopenhauer, Nietzsche, and Artaud.

Though staged fights date back to before Roman gladiators, mixed martial arts (MMA) is a relatively new addition to the world of sports. In 1980, a competition called Tough Guy Contest pitted wrestlers, boxers, kickboxers, black belts, and grapplers against each other in the ballroom of a Pennsylvania Holiday Inn. It was glorified street fighting with no official rules. Though instantly popular, the state promptly banned the sport. Not until the 1990s did MMA come back, thanks to the popularization of Brazilian Jiujitsu, Pay-Per-View broadcasting, and new regulations that required athletes to wear groin protection and outlawed dangerous behavior such as deliberately attacking an opponent’s spine.

While her academic peers chatted on the other side of the building, Howley took a seat on a bench in a different conference room and bore witness to her first cage fights. Before her, on an octagonal platform lit by a lofted spotlight and enclosed by a six-foot-tall chain link fence, two men “tore at one another with kicks and strikes, knees and elbows,” crumpling cartilage and cracking bones. Howley found herself genuinely mesmerized—instead of looking away or covering her eyes, she leaned in. She studied the bruises, the strangely indented skin, the breaks and the blood, the marks left after each curled fist made cold contact. Then, after several rounds, a misshapen man named Sean Huffman took his turn behind the fence. He was up against Kevin “The Fire” Burns, and what ensued was not a match between equals. Playing a role Howley calls “fat slobberknocker” to The Fire’s jabs and punches, Huffman was dismantled. He lost before the fight even began. And yet, for fifteen minutes, the pulverized athlete did not submit to defeat.

It’s here where Howley’s experience shifts from passive-spectator to bookish-mystic. Huffman was eating shit, his grin growing “with each precisely timed shot to his own mouth,” and then—there’s no way to put this that doesn’t sound loopy—time and space yo-yoed. In Howley’s words, “cloudiness momentarily departed” and she “dissolved into a kind of mist and expanded to envelop the entire space that held these hundred men.” Her body became “a tuning fork,” and thoughts “whistle[d] their way across [her] mind without . . . friction.” The graduate student underwent what Heidegger describes as “the poignant sense of having been thrown into the world without preparation or consent.” Philosophers call this ecstasy. In layman’s terms, Howley woke up.

After that fight, Howley started showing up at Sean Huffman’s gym, his favorite bar, his basement apartment, plying the often-stoned athlete with questions, admiration, and food, until at last, she became his entourage, a role known in the straightforward lingo of MMA fighters as a “spacetaker.” Spacetaker: the status is defined in the word itself. Howley became a benevolent shadow. She listened and praised and encouraged the fighter and, in exchange for this somewhat lopsided relationship, she got ringside seats and locker room privileges, which were essential. If Huffman ever recreated the conditions for the kind of space-time meltdown Howley experienced in Des Moines, she needed—in a primal kind of way—to be there.

But for a spacetaker hungry for ringside ecstasy, Howley made a poor choice in Sean Huffman. He fought infrequently, and his physique was on the decline. (“I love fighting,” Huffman told Howley, “but I also love sleeping.”) So, as any sensible ecstasy seeking, MMA-obsessed, philosophy grad student would do, Howley adopted a second fighter, the relatively unknown (at the time) Cedar Rapids featherweight named Erik “New Breed” Koch. Now she could attend two sets of practices, weigh-ins, and home theater screenings of old school fighter flicks. She could navigate two men’s on-and-off-the-ring battles. She had twice the opportunity for body-melting, time-stopping euphoria.

Part memoir, part failed dissertation, Thrown is 279 pages of reality TV show–like entertainment: Huffman discovers, via text message after a match, that he may soon be a father. Koch gets his feelings hurt and leaves home when his older brother uses the Internet to diagnose him with sociopathology. Huffman gets in shape to win fight money for his already estranged new son. Koch delivers a round one knockout punch, which brings him insta-fame and his own avatar in the Xbox game “Undefeated 3”. Each new drama provides Howley the opportunity to flex philosophical muscle. When Koch battles his video game doppelganger against the video game versions of real-life competitors, Howley speculates about higher beings and infinity: “Who was to say that some still greater game-player was not directing us; that flesh-and-blood Erik, not to mention flesh-and-blood Kit, were not in fact being played by some greater god being watched by a greater spacetaker on a more elevated, presumably cleaner, futon.”

The details of each fight—especially the author’s own dispute with her academic advisors over her “ongoing study of the phenomenological basis of ecstasy”—can get tedious, but Howley’s writing always stays sharp. She’s wry, observant, smart, and strangely revealing. Her devotion to MMA is practically religious, and she exuberantly shares her new faith with the reader. “My theory about octagons is this,” Howley writes. “There is really only one octagon and that one flickers in and out of existence over space and time, such that the very same octagon is summoned to consciousness over and over again. The fighters all know . . . why else the little bow at the cage door, the solemn straight-faced walk-out, the open-mouthed prayer as their brows are Vaseline-slathered. ‘Enter the octagon,’ says the announcer, and suddenly it’s there. Except for when it isn’t.”

For the most part, Howley’s thrall and disappointments transcend the page, and though ecstasy might not be achieved, it’s fair to say that the space between the book and the cage fight genuinely collapses. Howley’s prose is that hypnotic. On occasion, her snark grows too fierce or the descriptions too technical; and then, for a few pages but a few pages only, the magic flickers. These lapses are small, though. Thrown is a triangle choke, a leglock, a one-two-three sequence of humor, passion, and philosophy. It’s a knockout debut. A round one win.

Anya Groner received her MFA in fiction from the University of Mississippi, where she was a John and Renee Grisham fellow. She now teaches writing at Loyola University in New Orleans. To read more of her writing go to anyagroner.com.