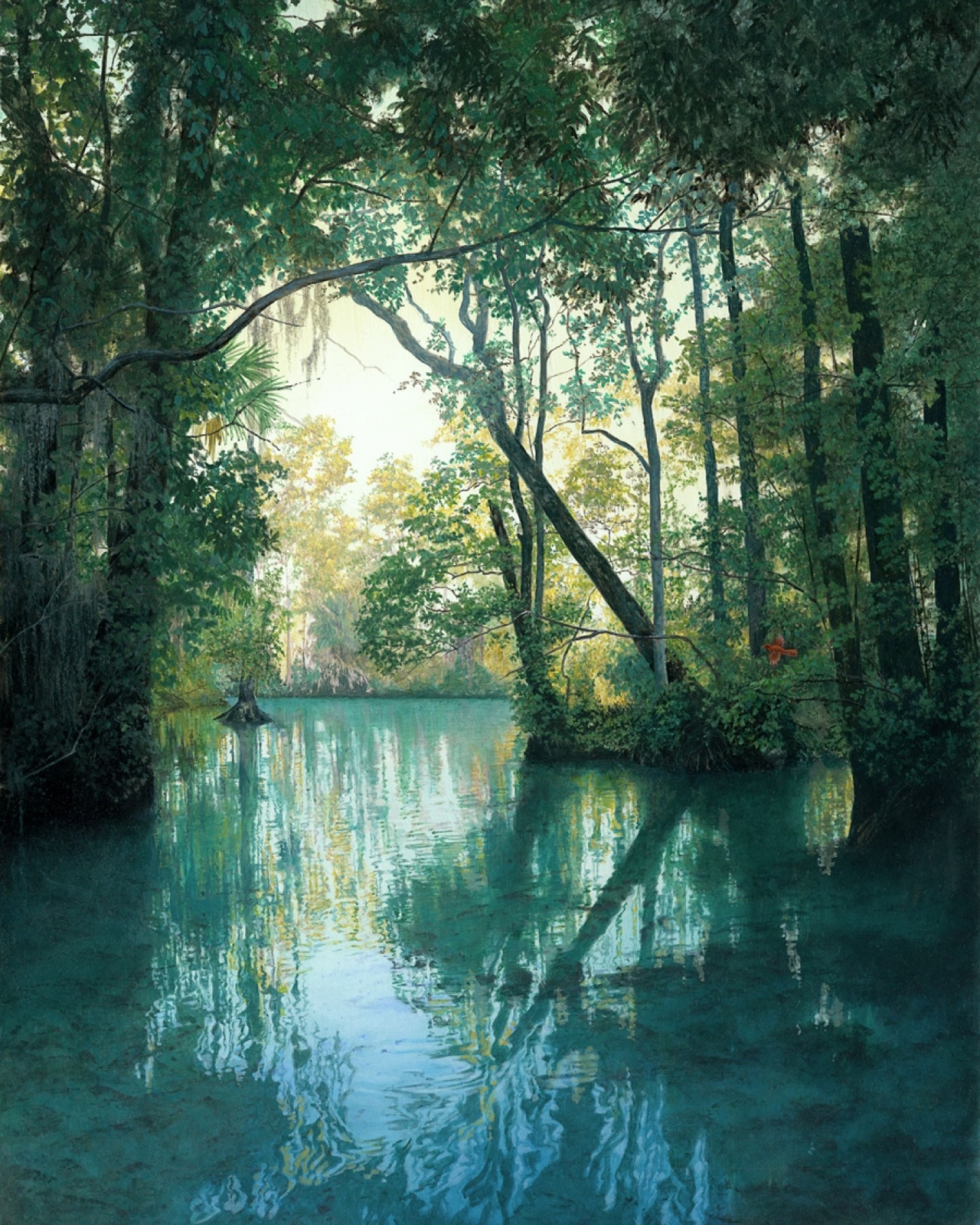 The Blue Ether of Another World

Once you could sit in a boat right over the spring source, hemisphere of sky above, hemisphere of water below, and it would be as if you hung suspended between the elements inside a perfect globe of morning-glory blue. Once the boat would have been glass-bottomed: you would have watched manatees and mullets swim beneath your feet, and, still farther down, lying on a ledge, the visible bones of a mastodon that died twelve thousand years ago when Florida was still young. Or, if you were a kid or silly (or both), you’d climb up the diving tower and jackknife into the springs, your body plunging down into the depths of limpid turquoise.

The rickety old tower at Wakulla Springs had three levels, the top one nearly thirty feet above the surface of the water—a height at which teenage boys could flex their courage. Paroled from high school in June, about the time the temperature in Tallahassee turned seriously ugly, Georgia, Joan, Mary Julia, and I’d drive out to Wakulla with a cooler full of Tab, a couple of cans of Pringles, cheap sunglasses for everybody, and the latest issue of Cosmo. I never had the guts to go off the third platform. Even just rolling off the first one, the water slapped you upside the head. The springs are as cold as Antarctica, as cold as the innards of an iceberg, as cold as outer space.

I exaggerate slightly: the water’s actually 70 degrees Fahrenheit. January or July, Wakulla Springs is always 70 degrees, which water-dwelling critters consider quite pleasant. Manatees flee the nippy Gulf of Mexico to winter in the Wakulla River. But I’m a Floridian, and compared to the temperature of a North Florida summer (hotter than holy hell and as humid as the inside of a dog’s mouth), the springs represent the ne plus ultra of cooling off. Hurling your body into the springs feels like resurrection. A shock at first, but then pure joy. In those heat-hazed high school summers, I’d float there feeling like a freshwater mermaid, the sand on the bottom glittering 185 feet below but seeming so near I’d think I could point a toe and touch it. If you swim into the limestone caverns down three hundred feet (and some people have), you’ll find a catacomb of ancient bones. The caverns are now part of the Floridan Aquifer—the vast, deep well that runs from the Atlantic coast of South Carolina through Georgia and Alabama, then south to the Everglades. Once it was like gazing into the entrance to Wonderland: you might see anything down there.

Once, but not now, not anymore. On a rare good day, you can still make out a gar or a Suwannee cooter swimming just under the surface. But the sugar-white sand on the spring bed is now carpeted with khaki-colored algae—when you can see it. Fifteen years ago the water was clear as gin; these days it’s a sullen gray-brown. Wakulla’s not alone; most of Florida’s great springs are sick. Silver Springs, Rainbow Springs, Ichetucknee Springs, Wekiwa, Santa Fe, Kings Bay, Ponce de Leon, Chassahowitzka, Homosassa, Lithia, Volusia Blue—of our one thousand artesian springs, an estimated 60 percent are what the hydrologists call “impaired,” polluted by agricultural waste, human waste, the tons of Miracle-Gro we dump on our lawns, trying to make our grass as green as Ireland.

The springs—more than the beach, more than the sunshine and the oranges—used to be our most important attraction. The naturalist William Bartram, wandering Florida in the 1770s, wrote of the springs as if they held supernatural power, appearing like “the blue ether of another world” and “almost as transparent as the air we breathe.” A hundred years after Bartram, Harriet Beecher Stowe rode down the Silver River and rhapsodized: “Clouds of fragrance were wafted to us from the orange groves along the shore; and the transparent depth of the water gave the impression that our boat was moving through the air.”

Silver Springs remained like this for another hundred-plus years. In the 1960s, before Disney colonized Central Florida, a million visitors a year descended to marvel at the water, the alligators sunning themselves on cypress logs, ibis, egrets, great blue herons, ospreys, and the lush tangle of candy-toned wildflowers. Weeki Wachee Springs became famous for girls in zip-up fishtails performing arabesques under water; Rainbow Springs was renowned for its peacock-hued waters. At Homosassa Springs, tourists came to watch schools of mangrove snappers, eels, and cooters swim with the manatees while roseate spoonbills landed on the shore and black bears and white-tailed deer made shy appearances from the deep woods.

By the 1980s, though, the Mouse had conquered. Tourists abandoned the springs in favor of Space Mountain and Snow White. At the same time, Florida began to pump too much water out of the aquifer, trying to satisfy cattle ranches and row crops and strip malls and big-box stores and resorts and all those new people wanting their own piece of Florida complete with a velvety lawn and a golf course less than a mile away. We didn’t just hog water—we trashed it, sullied it with old, uninspected, leaching septic tanks; paper mills dumping dioxins; cow shit from industrial dairies; and fertilizer-spiked runoff, all into our rivers and springs. Florida, you see, is half made of water, a place always on the edge of becoming liquid. As sea levels rise, the Atlantic eats eastern beaches and the Gulf of Mexico drowns barrier islands. The thin crust of earth covers—barely—a hidden sea of fresh water resting on an even deeper ocean of salt water. Much of the peninsula is karst plain, limestone as holey as lace, topped with a few inches of soil. Suck out too much fresh water and the land can collapse in a sinkhole, swallowing roads, houses, and sometimes people. Pour dirty water on the ground and it ends up in our drinking water, in our aquifer, in our springs.

For the last couple of decades, most of Florida’s ruling politicians concentrated on—in this order—getting reelected; serving their patron lobbyists from Big Ag, Big Construction, and Big Phosphate; and debilitating the very government they sat atop, railing against the regulations that might have cleaned up and conserved the water. But even the Florida Department of Environmental Protection, the state agency charged with the care of our natural treasures, puts profit before clean air and clean water. Now we suffer the consequences: the death throes of biologically rich estuaries at Indian River, Florida Bay, and Apalachicola, and the Everglades threatened by development, exotic species, and filthy runoff from Lake Okeechobee, courtesy of Florida Crystals and U.S. Sugar. The St. Johns, the Santa Fe, the St. Lucie, the Caloosahatchee, and too many other rivers suffocate under a thick, greasy blanket of toxic algae that can cause nausea, blistered lips, skin rashes, liver damage, and respiratory distress. That’s just what it does to humans; the plants and animals die.

You can’t miss the ecological degradation at Wakulla Springs and on the Wakulla River: the eel grass—habitat for damselflies, snails, and all kinds of fish—struggles to survive. Hydrilla, a monstrous invasive plant first imported in the 1950s to decorate aquariums, threatens to choke the life out of the last eel grass meadows, as well as the springs’ flora and fauna. Hydrilla feeds on the nitrates from runoff. It can grow up to an inch a day and lies like a mat of AstroTurf on the water’s surface, cutting off sunlight, killing the native water plants. The state has had to resort to herbicides to kill the stuff—weed killer in water that was once the purest on earth. The apple snails I used to see everywhere, their eggs hanging on the river reeds like pearls around a debutante’s neck, have vanished. And because they’re gone, the limpkin, a chocolate-colored wading bird with a banshee call and a curved escargot fork for a beak, has also gone. Apple snails were the limpkins’ food.

I went down to the springs in March and took the state park’s riverboat tour. A few anhingas still held their wings out to dry after diving for food, beaks in the air, looking as though their dignity had been sorely affronted. A manatee mother and baby pushed broad, whiskered faces up out of the water. But Henry the Pole-Vaulting Mullet—the latest Henry, anyway: there have been dozens over the years—did not appear. Perhaps he’s relocated to cleaner water. At least the herons were around: great blue herons, little blue herons, green herons, yellow night-crowned herons. And alligators. Alligators can stand almost anything as long as it’s wet. They regularly lumber into suburban swimming pools to chill. But even alligators, an ancient species with one webbed foot in the late Cretaceous period and one in the twenty-first century, cannot flourish as Florida poisons itself.

The electric river cruiser—named Limpkin, as it happens—circled the springs. The driver told us that it had been eight years since the water was clear enough to run a glass-bottomed boat. I looked hard into the place, more or less, where the vent boils up 250 million gallons of water a day. The springs used to be a kind of magic mirror, in which you could see past, present, and future. Now the mirror is clouded. Down there lies limerock formed from the skeletons of fish and coral that began to ossify when Florida slept submerged in shallow water, one hundred million years ago, a geologic history that reaches back to the ur-continent Pangea. Down there in the spring, our present reproaches us. We’re fouling the water that gives us life. If we don’t stop, we’ll destroy Florida. Our marshes and wetlands, filtration systems for storm water, will collapse. Our beaches and rivers will stink of dead fish. If the fish die, the birds leave. If we take too much fresh water from the limestone aquifer, the ancient ocean of salt water that lies under it will invade our drinking water. That will be the end. We will have to give Florida back to the sea whence it came.

Diane Roberts’s most recent book is Tribal: College Football and the Secret Heart of America. She lives in Tallahassee and is currently at work on a series of essays on white women.