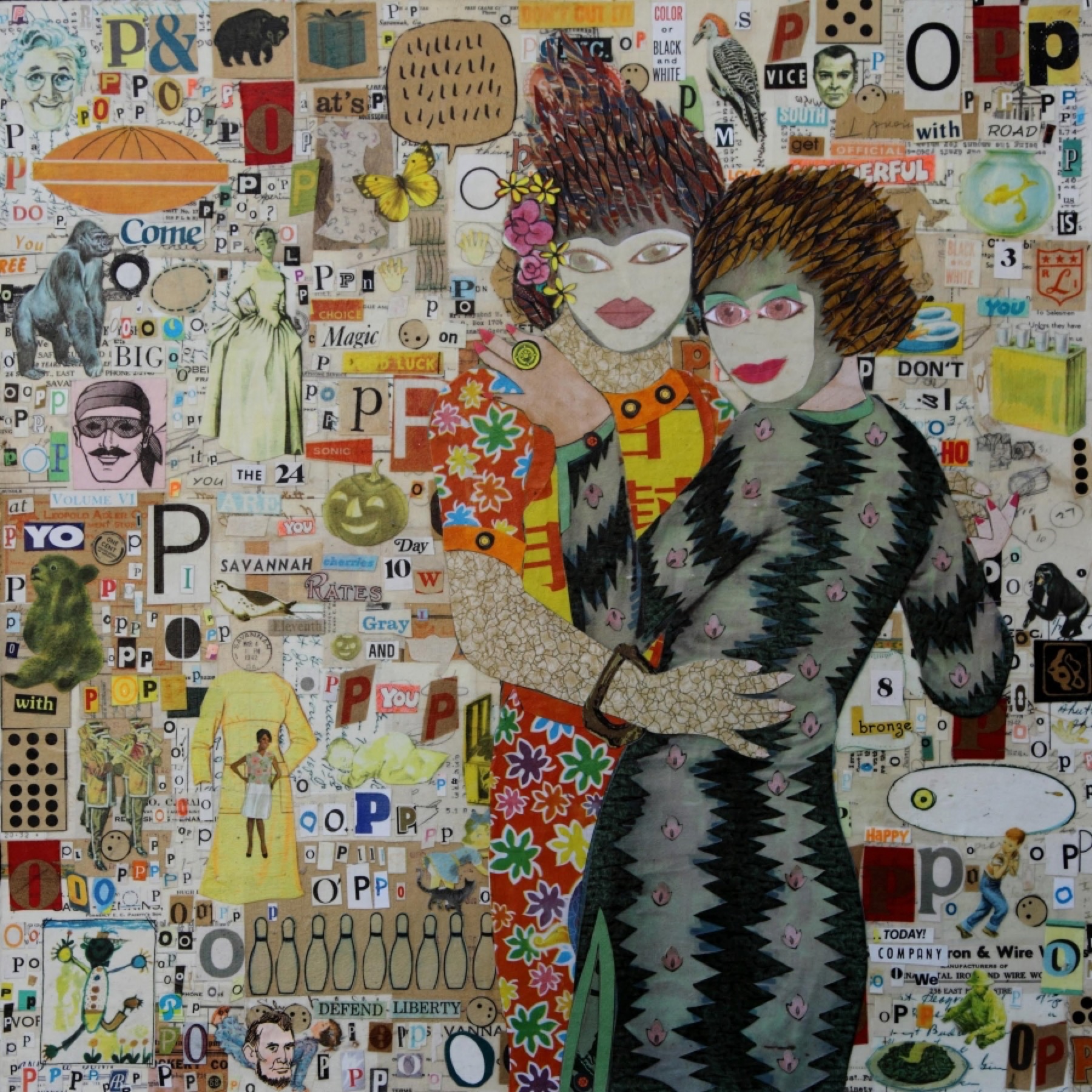 BEAUTY OUT OF THE BEAUTIFUL

Last year, during the end of a particularly painful Vermont winter, I was drawn to visit moss-draped Savannah, Georgia, to sit by the water and feel the bright sun on my face. My friend, the artist Sarah Walko, suggested I meet Marcus Kenney and stay in his studio for a night, assuring me it was a magical, otherworldly space. She was right.

Marcus and I never met that evening—he was sick, so his wife, Sarah, greeted me at the downtown studio to let me in. Soon I was standing in one of the most unusual, saturated, vibrant places I’ve ever spent the night. There were taxidermy deer covered in embellishments, walls of photographs and magazine clippings, a Prince poster, an American flag, weathered signs, bald mannequins, tables laden with sequins and vintage advertisements, a pair of hard-working scissors.

It was exciting to be in a place so purely creative, a place where real, hands-on work was done. I walked the rooms late into the night, pouring over the casual altars of kitsch and bona fide treasures, plastic eyes trailing my every move; to sleep alone in such a place made me experience a collision of joy and terror. My response was not unlike what a gallery patron might feel looking at one of Kenney’s works: I was fascinated by color and beauty, unsettled by the bizarre.

Marcus grew up in rural Louisiana, then received an MFA from the Savannah College of Art and Design. His work has been exhibited in New York, London, Miami, Chicago, Atlanta, Hong Kong, and Paris, and currently adorns the cover sleeve of the Oxford American’s most recent Georgia-themed music compilation. It was a privilege to catch an interior view of Marcus’s work life that cold spring night, to witness the trove of raw material and works-in-progress, and it left me curious: What drives Marcus Kenney to create?

My friend, the author Allan Gurganus, once said in an interview that we’re all “fools for beauty.” What is your relationship to beauty? Where do you look for it in the world, if at all?

Beauty is important to me on so many different levels. Of course I am drawn to the natural beauty found in creation. I try to have my work be at once aesthetically appealing and yet also conceptually challenging. I love to tell the story of my elderly Cajun grandmother in Louisiana. Once I found her in the garden spray-painting a camellia bush in bright silver enamel. Thinking that she had lost her mind and didn’t know what she was doing, I warned her that she would kill the bush, to which she replied, “Yes, but it will be beautiful!” I think in a lot of ways that describes my approach to beauty. I am compelled to create my own beauty out of the already beautiful.

In the writing world, we often resist mentioning the author’s biography and childhood in the critical reading of his or her work. Do you resist biographical inquiries into the understanding of your pieces?

That’s a really hard one because I do want the work to exist outside of “Marcus Kenney” and yet it is such a part of my story. Too often we read or judge a work based on its author and put those preconceived notions onto the work. I like to think of myself as an Artist and not a Caucasian father in his mid-forties who was raised in the South and who makes work from only that perspective. The thing about creation is that it oftentimes can transcend its creator and still be Truth. Of course my work can reflect me but it can also reflect us.

We both, as writer and artist, make work to be consumed, and it is assigned value. I’ve read anthropological work that says humans are, at heart and soul, materialists. What material do you find value in?

I’ve made a career taking the discarded and the used and giving it new life. Material is primarily my medium. It is how I speak. I genetically have a pack rat mentality that can feel heavy and weighted but it is because of that weight and carrying those materials that I feel the desire to create and make something new.

I’d really love to hear more about your work with taxidermy and animals. Can you tell me about your relationship to those pieces—what inspires you to work with these materials, and how do people respond to them?

I grew up in a hunting family in Louisiana. We had a couple deer trophies hanging on our wall and my mom would often decorate them according to the seasons. For instance, during Mardi Gras she would string beads around the antlers, and likewise, during Christmas, they would get outfitted as Mr. and Mrs. Claus. I had acquired a couple of vintage trophies and had them hanging in my studio, and over the years they began to accumulate various materials the way a shelf or table would. A friend came by the studio and went crazy over these unintentional pieces, and there began that series. Each animal takes its own personality through the materials and colors that it assumes. I will often base them on people I know or characters that I have encountered.

What is making art in Savannah like? Your studio space seems to invite inclusion, community, and conversation.

I have lived in Savannah for over twenty years now and I am in love with her as much as ever. The constant parade of characters that occasionally call Savannah home is my most cherished resource and inspiration.

A selection of works by Marcus Kenney

To read more interviews, subscribe to our weekly newsletter.

Megan Mayhew Bergman is the director of Middlebury’s Bread Loaf Environmental Writers’ Conference and the Robert Frost Stone House Museum at Bennington College. She is the author of two story collections and a forthcoming novel. She was a fellow at the American Library in Paris in 2016.

A VISIT WITH WHITE OAK PASTURES