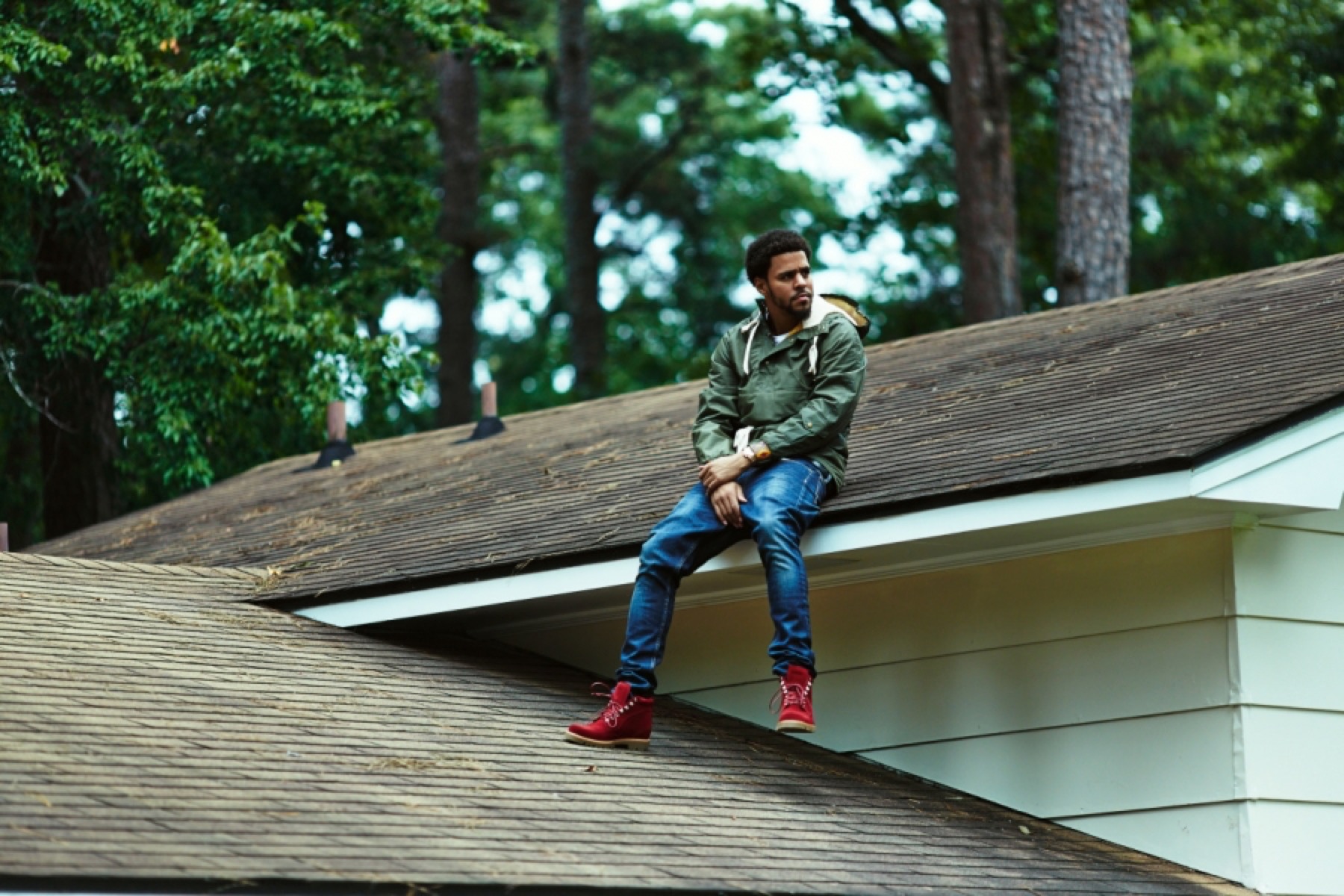 J. COLE AT THE SOURCE

On a Monday morning in June, the patrons of the YMCA in Fayetteville, North Carolina, are almost all white adults. White guys stomping on treadmills. White women in glossy exercise outfits performing chest-presses with dumbbells the size of dog biscuits. Two smiling young ladies work the front desk, neither of whom has heard of Jermaine Cole, Fayetteville’s hip-hop hero. In fact, there appear to be only two fans in the whole building: myself and Jerome, a seventeen-year-old North Carolina transplant nailing threes with ease on the neatly waxed basketball court. After listening to a leak of J. Cole’s forthcoming sophomore album Born Sinner, I drove two hours during a statewide tornado watch to ask what, if anything, Cole’s ascent means to people back home.

“Cole is special no matter where you’re from,” Jerome tells me, seated now, relaxing into his sweat. “I mean, I’m from D.C. originally, you know, so I’m more about Wale. But nobody’s gonna deny that Cole is now a major player.” Jerome has heard one single—“Power Trip,” a collaboration with neo-soul crooner Miguel—off the new album. “It’s strong,” Jerome nods. “That could be a money track. My friends around here are just waiting for J. to come home once it’s official, once the album is really out.”

Cole and his devotees are banking on such “money tracks,” and Cole has hastened his album’s release date to coincide with Yeezus, Kanye West’s new album, coproduced with industry heavy Rick Rubin. That’s a bold move for Cole, especially since he doesn’t have a proper “crew” to rep for him the way someone like 50 Cent had among the Dr. Dre diaspora.

Cole returns to Fayetteville semi-regularly, for promotional and charity work, but spends the rest of the year in New York. On Born Sinner, he sounds increasingly dissatisfied with this arrangement, which traps him in New York when perhaps he’d rather be back home. I float this idea. Jerome says it’s plausible. “One of these times when J. comes back, he’s coming back for good,” he tells me, and he speaks these words with a conviction that startles. I simply nod. Part of me can’t help but believe him.

J. Cole knows Fayetteville from all angles, having lived at different times in its trailer homes and houses, and on the army base. Fayetteville is several cities in one. Its downtown is a shiny brick monument to gentrification and the American brasserie movement; Fort Bragg’s largesse keeps the city’s median income above the poverty line, if not by much. Driving in from the west, one passes countless pawn shops, army surplus stores with handwritten signs, Southern Sons Tattoo, billboards advertising “no-money-down bankruptcy,” the Tropical Motel offering RATES DAY WEEK MONTH, a trailer fire sale labeled “Choo-Choo Homes,” above-ground pools for sale that don’t seem to be selling, and at least four very dubious-looking self-storage centers. The twenty-eight-year-old Cole knows these social strata with a familiarity that may well fuel his expressed wariness toward wealth. As he sings on the new album, “money don’t last.”

Without parading a Dickensian childhood before us—the way lesser rappers tend to mistake the studio for a therapist’s office—Cole turns his un-self-pitying scrappiness into his most charming characteristic. Fayetteville may not appear by name in each of his songs, but it’s there in the wry, money-ain’t-shit attitude and the fluent but boisterous patter of Cole’s lyrics. Although Cole is well educated (he graduated from St. John’s University magna cum laude), his delivery sounds unstudied, even as he reduplicates internal rhymes and uncoils a verse at breathless speed. Among other improvements, his tongue is fleeter on the new album than ever before.

J. Cole is of a generation of rappers, including Kendrick Lamar and Danny Swain, who knock on the old street misogyny trope just to show how hollow it is. Cole addresses women with empathy and honesty to the point that the ladies in his songs are far more interesting than the men. And if hip-hop is slowly expanding its gender politics, the hustle is also expanding to include things like getting scholarships and not siring children until you’re good and ready.

The kind of good advice that Cole offers may not be the traditional purview of rap, but make-it-in-America stories fall very much within rap’s ken, and Cole’s ability to merge these two, while making asses shake, is of great value. More important—at least to his fans in North Carolina—is the fact that Cole is acknowledged as one of the most legit voices in southern rap—and he’s not from Atlanta. This is a big deal, something Fayettevilleans remember whenever Cole returns to work on the literacy program he started, or film the odd music video on Bragg Boulevard.

Terrance is waiting for his buddy D.A. in a parking lot across from Terry Sanford High, where Cole hustled to earn the scholarship to St. John’s. The long game was to get a foothold in New York, and then to get Jay-Z’s attention. Cole succeeded on both counts. Terrance dangles a leg out the open driver’s-side door and smiles when I ask about Sanford High.

“I was two years ahead of J. Cole,” he says. “He was a real kind, goofy, smart kid. You’d see him, like, scribbling in these little black notebooks. I didn’t really think much about it back then. Oh, and he played basketball.”

“Oh yeah,” Terrance nods. “Nigga had speed, and well you know how smart he is. He wasn’t the tallest out there, but he got his.”

I ask whether Cole has any hometown nemeses. “Well look, there was a lotta kids who dropped raps and made beats, so when he made it out you had jealous kids calling him a ‘fake-ass nigga.’ But you don’t hear that anymore.”

D.A. arrives in very high spirits and is overjoyed to talk Cole. “Did T. tell you Cole’s next move?”

“So we all know Cole doesn’t want to roll with Jay-Z too long,” D.A. shrugs. “Think about it! Would you wanna roll with a nigga who held your first album for years?”

I agreed that I would not.

“What’s going on in Fayetteville right now—you have these young acts that can truly throw down, I mean it, and Cole’s gonna be positioned to come down here and start his own label, go all Michael Jordan on it. Look, you go to the mall, you can’t throw a rock without hitting some kid who’s freestyling. We got a whole talent pool here.”

“And Fayetteville can be the new Atlanta,” Terrance adds.

This the shit I used to roll down Lewis Street with / Finally got my own bedroom in this bitch.
—“Land of the Snakes,” 2013

As I roll down Lewis Street, I’m surprised to see well-tended lawns, and I get the sense of a wholesome residential area; Cole’s songs had me expecting a working-class, block-party neighborhood. A lot has changed in the ten years since Cole left. Now, for every black twenty-something drawn to the familiar sounds emanating from my car, there is a white household. Two Romney/Ryan signs protrude from the ground at a bend in the road, holdovers from last year, like rotten pumpkins at Christmastime. I circle back to friendly territory.

Daniel, a black resident in his early twenties, stands on his porch. A spindly four-year-old plays hide-and-seek between his legs as he explains that the neighborhood used to be something of a party destination for Sanford High upperclassmen. “I was younger than Cole, so I never really spent time with the guy,” Daniel tells me. “Lotsa my boys know him, though.” He pauses and grins, adding, “And lotsa girls, well, they know Cole too.”

I submit the idea of Cole-as-feminist, without using the word. Daniel puts it well: “Cole is the kind of smart, honest rapper you could play to your old lady and she wouldn’t get mad.”

Daniel smiles, looking through the screen door behind which his son has disappeared. “Well, my boy too young to listen to the uncensored shit. But if what you’re saying is Cole doesn’t do lines about cash and crack rocks and bitches, then yes. He reminds me of Run-D.M.C., the subject matter, I mean. This is righteous rap.”

How does Cole rank in Daniel’s personal hip-hop pantheon?

“Oh he’d have to be top five.” Number one? “Kendrick Lamar.”

And I’m going rep the Ville in every city that I’m at / And I guarantee I’m bringing home plaques.
—“Royal Flush,” 2009

The mall, I discover, is far from the hip-hop salon Terrance and D.A. described. I find a rather upscale food court. There are multiple frozen yogurt emporia. The canned music is atrocious and has very little to do with R&B.

Matt, a charismatic young salesman working a basketball-shoe maintenance kiosk, credits the death of mall rap to the “escort policy” enacted close to a year ago, which requires that minors have a parent with them after 5 p.m. on Fridays and Saturdays. “Frankly,” Matt says, “This place is a lot more like a real mall now, as opposed to . . .”

“Yeah, pretty much. I mean, I liked those guys, I’m all about Fayetteville rap of course, but we were sometimes the epicenter of rap battles that turned into all kinds of scuffles.”

No scuffles today. Just a little muzak, a lot of docile shoppers, and security all over. Matt says the mall hired a slew of new mall cops over the past year.

“I once watched Cole recording a music video down here,” Matt tells me, almost certainly referring to “Who Dat,” Cole’s 2010 major-label debut single. “He’s famous for giving back, you know? Being a normal-ass dude. Like, I have buddies who go to Xscape with him, this pimp nightclub, and Cole just brushes off the V.I.P. booth and the bottle service.”

“Tell me about it,” Matt says.

Across the hall at Lids, a chain that sells expensive, flat-brimmed baseball caps, a salesman named Ian hears us talking about Cole.

“J. Cole? I was in his freshman class!” (This is one idiosyncrasy of a city premised around a military base: if you stick to the civilians, it feels like a very small town.) We talk about Cole’s trajectory, about Jay-Z’s patronage and whether the relationship is becoming fraught. Ian notes that Cole is still contending with major hype (much of it, naturally, of his own making) and marvels at the rapper’s consistency and confidence.

“He sounds young, you know, but his style is so solid that it’s like he skipped a few steps in the game. He’s where other rappers dream of being when they’re, like, thirty-five,” Ian tells me. “I only know that one new single, but Cole is that level of rapper where you trust him to keep getting better every day.”

Ted Scheinman lives in California, where he is a senior editor of Pacific Standard magazine. His essays, reporting, and criticism have appeared in the New York Times, the Paris Review, Playboy, and Slate.