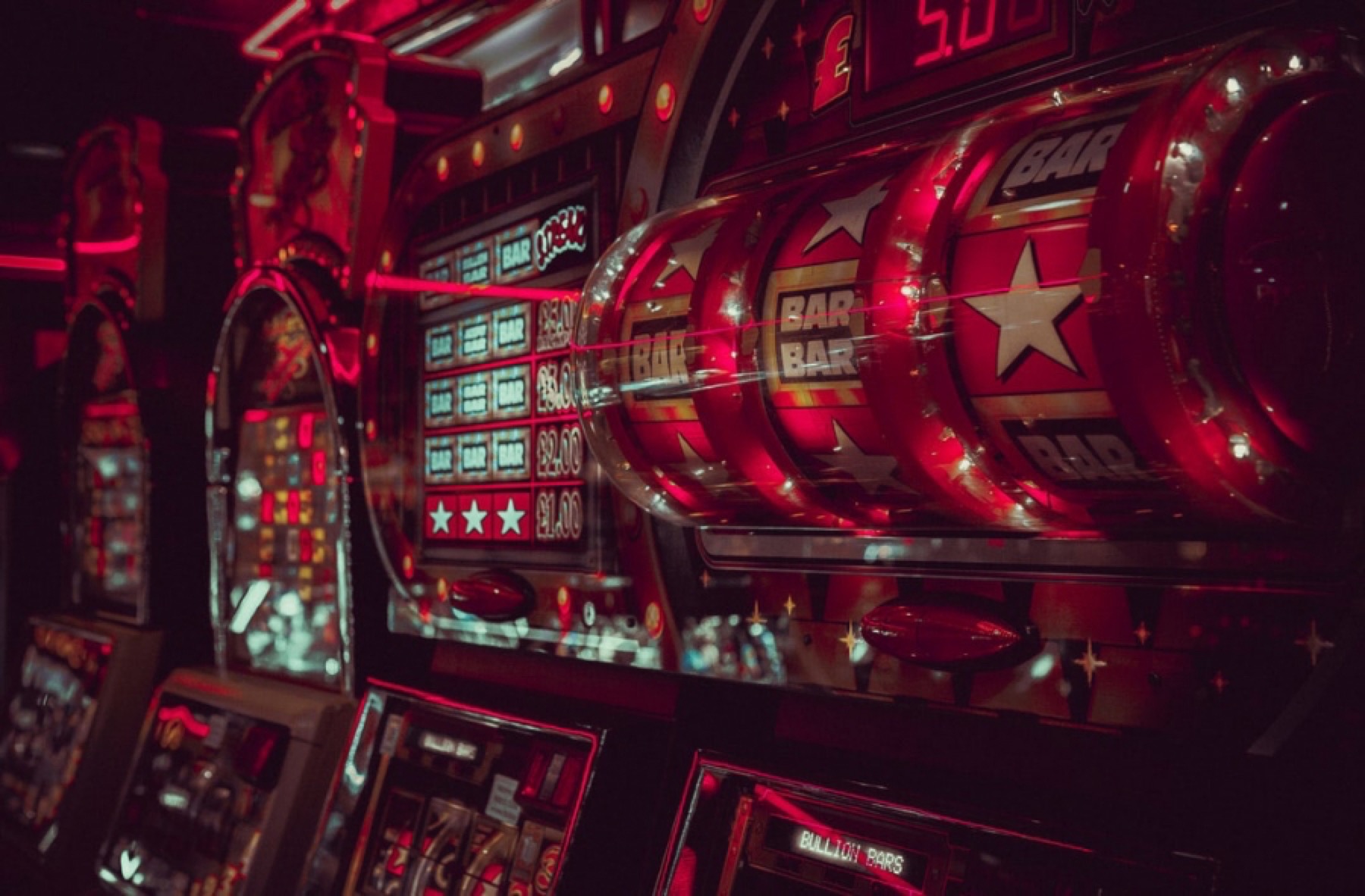 Photo by Carl Raw via Unsplash

Excerpted from Sugar Run by Mesha Maren, to be published by Algonquin Books on January 8, 2019.

“Check,” a voice calls out through the swarm of smoke and ping of slot machines. The voice is distinctly female in a room full of the deep vibrations of men.

Jodi glances over her shoulder, past the Triple Rose, Crazy Eights, and penny arcades, to the far corner where a poker game is under way. In a cocoon of smoke at a green table sit a trucker, a bearded dude in a hunting cap, one thin, pale-suited man, and a woman dressed like a redneck boy. The woman leans forward, elbows on the table and black hair slicked back under a cap. She’s been there for three days, winning more than half the hands she plays, and her presence carves a space in the room disproportionate to her size.

“Here you go, sweetheart.” The bartender pours a long stream of reddish­orange liquid into a frosted glass, lifting the shaker high and dripping in the last drops with a flourish. Jodi nods and swivels toward Jimmy Lauder on the stool beside her. His eyes jump to her face and she can feel his pride swell over the fact that she is sitting here with him. Jimmy was hired on at Render High only months before, taking over the junior- and senior-year chemistry classes. He has not started balding yet, though his body is softening into middle age. He is grateful, nearly pious in his appreciation of Jodi’s tight flesh, and his chemical-stained fingers move electric when they touch her.

In the weeks after Effie’s death, while the bank men and lawyers stalked her grandmother’s land, Jodi had escaped her parents’ house and lost herself in the pulse of Jimmy’s fingers and those long chalk-dusted afternoons. She is enamored with his need for her, the lost-dog look he gets in his eyes, and the way she can, simply by removing her shirt, cause him to tremble and beg. She is secretly astounded that this body of hers, with its bony angles and pale, chigger-bit skin, can have such power. She carries this knowledge around with her throughout her days and it makes her feel colossally tall.

“You want more vodka in there, you just tell me.” The bartender, Jimmy’s older brother, is pathetically proud to be serving Sex on the Beach to a sixteen-year-old. It is in his pickle-green trailer, in Wheeling, that Jodi and Jimmy are staying, blinding themselves all day with alcohol and the jittery screens of slot machines. Four days at the Wild ’N Wonderful Casino but this woman at the card table is the only interesting thing Jodi has seen.

She could be beautiful if she didn’t look so strange, dressed in the same worn flannel and work boots that all the men in Jodi’s family wear, a web of blue-black tattoos sleeving the skin of both arms. She is softly familiar but altogether different, a mixture of beautiful and ugly that wavers, like a hologram. Sharp cheekbones and a full pout of a mouth. She’s built like a country boy too, broad in the shoulders, thick biceps, and narrow hips.

“Hey, baby, what do you want to eat?” Jimmy leans in close, his hand against Jodi's back.

Jodi shakes her head and takes a sip of her drink, the cold crystals catching in her throat.

At the poker table the suit flicks four orange chips from his stack. Beside him the trucker looks at his hand, then sends his cards sailing in the general direction of the dealer, who collects them swiftly and points at the woman. She adds orange chips to her purples and pushes them forward.

The bearded hunter folds, slides his cards to the dealer, and sits small in his chair as if losing to a woman has made him physically shrink.

On the stool beside Jodi, Jimmy spins, turning his attention to the game. His fingers find the clasp of Jodi’s bra under her shirt and he plucks it in a rhythm of one-two-three.

The suit matches the woman’s stack.

For a moment, neither the woman nor the suit move.

“Gentlemen,” the dealer says, then glances at the woman and starts to correct himself.

She lays her cards on the felt and the dealer then pivots to the suit who throws his hand facedown. The dealer nods and rakes the pot toward the woman, chips jumping and clattering. She gathers them and then stands, mouth set hard, staring straight at Jodi.

“What a game.” Jimmy laughs a laugh-track laugh and brings his hand down to Jodi’s waist. His sweat hangs between them, smelling of fast food and anxiety.

In the bathroom mirror under the sharp overhead lights, Jodi is too skinny, with too many freckles and all that stringy black hair. She smoothes her tank top and pulls it low across her tits. The light flickers and the door swings in. Jodi freezes. Behind her the woman stands so close she could stretch her fingers out and touch her, so close she can smell her. Bourbon and cigarettes and something sweet. Jodi looks up and meets the woman’s eyes in the flecked glass, and her breath jackknifes, a sharp heat forming between her legs.

“How much is he paying you?” the woman asks.

Jodi blinks and shakes her head, a line of sweat trickling down her chest. “We're just friends.”

The woman’s lips break into a wide smile. Jodi stares down at her feet. She can’t really explain, even to her own self, the hunger inside her and the way that Jimmy’s lust can make it temporarily evaporate.

Jodi moves away, scuffing her sneaker along the tile floor.

“You don't even know what you like, do you?” the woman calls, and then, as Jodi opens the door and the flush of casino music filters in, “My name’s Paula,” she says.

By the time she has resumed her place at the poker table Paula has attracted a flotsam-jetsam audience: the bartender, a silver-haired businessman, the hunter, who is sitting out a round—everyone but Jimmy, who rests heavily in the low-slung seat in the Triple Rose machine, feeding it quarters. Jodi watches from the bar and every time she looks at Paula her breath goes all funny in her chest.

Paula matches him, and the game rolls out in a repeating shuffle and snap. All Jodi understands of poker is the tight, angry wrestling of egos. The games she’s used to are a jumble of dog-eared cards and sweaty bills on oil drums out back of the Gas ’N Go, insults and compliments traded between neighbors and cousins while the girls nurse beers and stretch out on the hoods of rusted Chevys, showing off their newly shaved legs.

“Jesus fucking Mary.” The trucker sends his cards up into the air in a bright flurry. “The way she’s watching the dealer, she knows what’s coming her way.”

Jodi blinks and tries to focus. Something is happening and she doesn’t understand. The energy in the room has shifted and she tries to parse out what has just gone on but the vodka is heavy in her head.

The suit says something that Jodi can’t hear and sets an orange stack of chips on the table. Paula tightens her eyes. “Raise,” she says.

The suit nods and a tickle of a smile crosses his lips. He reaches for his chips. It’s just the two of them left in the game now.

Jimmy has gotten up from the Triple Rose machine and he is pacing between Jodi and the poker table.

The suit moves. He bucks across the table toward Paula and a slurry of words spills from his mouth. “. . . fucking bitch.”

Paula doesn’t flinch, the air smooth around her like a shield. The room is a sweating, beating organ. It constricts in low, instinctual rhythms: voices from the TV and the music of the slot machines.

All eyes on her.

Jodi leans forward but Jimmy is blocking her view. She pushes up off her stool but she is too drunk. She sits back down and wills Jimmy away, wills them all away, everything but the clean strength of Paula. She brings her cigarette to her lips. From the speakers overhead a song fogs out: Our land, our land is far through the heart of this snow. Jodi closes her eyes and focuses on the sad lilt of Lee Golden’s voice on that radio—far through the heart of this snow. She takes another drag and in her mind’s eye she sees Paula reach into her jacket and retrieve a silver pistol. She pictures Paula raising it high above her head.

A shot roars out and then a white rain of plaster filters down over the table.

Paula brings the pistol level with the suit’s forehead and then, smiling, she pulls back and smashes it into his face. The suit lets out a long wet noise as bright blood runs out his nostrils and into his mouth, blooming in great dark spots all down his white shirt.

Jodi’s pulse thrums and she opens her eyes. She blinks and the room tips a little, readjusts: that song is still playing, Lee Golden's lullaby fuzzing out through the speakers, but there is no gun, no blood, no hole in the plaster above. No Paula.

Her stomach buckles. She looks at Jimmy, slouched back into his cockpit chair, and panic shatters open inside her. Focus. Did she dream her? The bartender is there behind the bar and the men are standing around the table, the dealer, the suit, the trucker, and the rest. Focus. She’s been doing this too much lately, ever since Effie’s death, letting her mind run into wild dreamscape universes. Focus. She pivots on her stool, turns toward the back of the room, and there, shadow-cast under the red EXIT: a black-haired figure.

Jodi jerks. She feels the sweaty pressure of her own fingers pushing her body up, her blood suddenly buoyant, and though it is too fast to know, she does know. Everything else smudges out as she focuses and she sees herself choosing. She sees her own legs unfold, her body turn and release.

Our land, the radio croons, our land is far through the heart.

She tumbles into the hallway, past the brass elevators and on toward an exit door so heavy she has to slam her hip to open it. The sunlight scrapes her eyes and she stands there, breath ragged and blood still hurtling, until the black dots diminish and she can see: Paula, halfway across the asphalt lot, head turned and eyes on Jodi as a hot wind flaps around her, filling her shirt and lifting it like a billowing sheet.

FLASH OF INSPIRATION: “WE, MOONS” AND MY STORY COLLECTION